Twisted angry faces, blocked public spaces, screams, and mayhem. Appalling and repugnant. The modern protest epidemic has become nothing more than a collective temper tantrum of lefties, and snowflakes; funded by the elites. I know I’m not the only one who is absolutely, categorically fed up by it all.

It won’t come as a surprise to any of you to learn I was raised in a household that was, and remains, devoutly anti-union. Coming from a strong entrepreneurial family I was shown how these unions and their civil disobedience serve no other purpose than to make union bosses rich all the while shackling both the workers and the risk takers. In a sort of rebellious curiosity I chose to do a major project on the Winnipeg Strike of 1919 while in high school. Although many elements of that demonstration certainly do not resonate with me at all, it did reveal a clear injustice. Soldiers returning home from war, rather than being heralded for their heroism and provided every opportunity to succeed in the very society they had protected, were left to scrape by. Between the very low wage rate and sizeable inflation their families were forced into poverty and desperation. Remember this is 1919, long before the intricate economic safety net of our modern age; a very real and desperate circumstance! With nothing more to lose they turned to the only method available to try and remedy their circumstances. Civil disobedience… 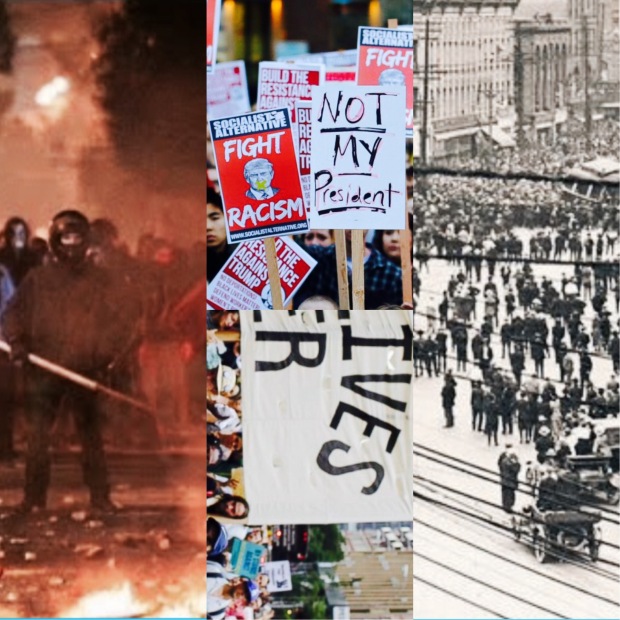 All of this is to say there certainly is a time and a place for a public outcry. Ezra Levant and his Rebel.Media Carbon Tax Rally this past Sunday in Edmonton may very well be the best modern example. Desperate Albertans rallied together to try to bring a real human element to the punitive Carbon Tax, to show lawmakers the human cost of their decisions. These people are already victims of a government that turns a blind eye to their best interests and now threatens to take even more of their precious self-sufficiency and dignity. Dare I say every Canadian owes the organizers and attendees a sincere thanks for trying to plug the leftist bleeding in this country! Conservative politicians should be lauding this group for their efforts.

Sadly, other public displays across this great continent have been completely void of this nobility. These agitators aren’t fighting for survival, but abstract worldviews and opinions. Anti-Trump, Black Lives Matter, NAPL in North Dakota, and the Trans Mountain/Line 3 protestors have been anything but noble in their respective cause and behaviour. In most cases they have caused property damage and bodily harm. These people make sport of hampering society’s ability to function and bringing suffering to those who do not share their beliefs. They almost seem to take a sadistic pleasure in inflicting pain on their victims. These riotous louts are people who just didn’t get their way. Since they have no rational demands their goal is to foist their ignorant, selfish disappointment on the rest of us. Rather than being grown-ups and living with it they throw a massive temper tantrum.

I am a fervent believer that any civil action that impedes the daily life of regular citizens should absolutely be illegal. As a blogger it goes without saying I treasure and respect free speech. It is a fundamental element in a genuinely free society. However, no one is entitled to block city streets, to delay movement, to intimidate law abiding citizens. In most cases those invaded public spaces are areas funded by you and me, the taxpayer, for our use and enjoyment. These are not staging grounds for the malcontent, lazy, Social Justice Warriors to whine about faux-injustice. Just once I’d love to see one of these highly disturbed individuals dropped in the middle of Liberia, Syria, or North Korea and see how quickly they would be on their knees begging to return to the grand luxury of North America. Wailing to come home to the sweet cushion of lawful elections, enshrined equality, abundant energy and consumer products. Protesting these things is a twisted, nauseating, ungrateful action of someone who has seen no REAL STRUGGLE.

Get off our streets and sidewalks with your pathetic negativity. If you’re so filled with rage and disappointment that you just can’t stand it, get therapy, or take a kick boxing class. Kindly remove your head from your delicate gilded posterior, or stay home.

Some of us are busy trying to build bigger and brighter futures. Some of us are looking for the solutions that will allow EVERYBODY a chance to thrive.