On Tuesday, May 3rd the citizens of Fort McMurray, Alberta, Canada saw their lives become a waking nightmare. As wildfires engulfed their beautiful city, the largest natural disaster in Canadian history began to unfurl. 88 THOUSAND men, women and children were forced to flee from their homes, in most cases taking only what would fit in their vehicles, in worse cases some setting out by foot just hoping to catch a ride to safety. These people were fleeing to the unknown as flames threatened to destroy their homes, schools, and businesses; their hard work and precious memories.

It didn’t take long for social media to start trending #FortMacFire, #FortMcMurray and #AlbertaStrong. Most tweets focused on sending messages of hope, prayer, reunification or most importantly vital support details. Sadly there were some who saw this enormous tragedy as an opportunity to further their own agendas. ‘Fear the Walking Dead’ Executive Producer Gale Anne Hurd (@GunnerGale), of your network, chose to do just that! (For your convenience I’ve attached a screen capture of her tweet.) 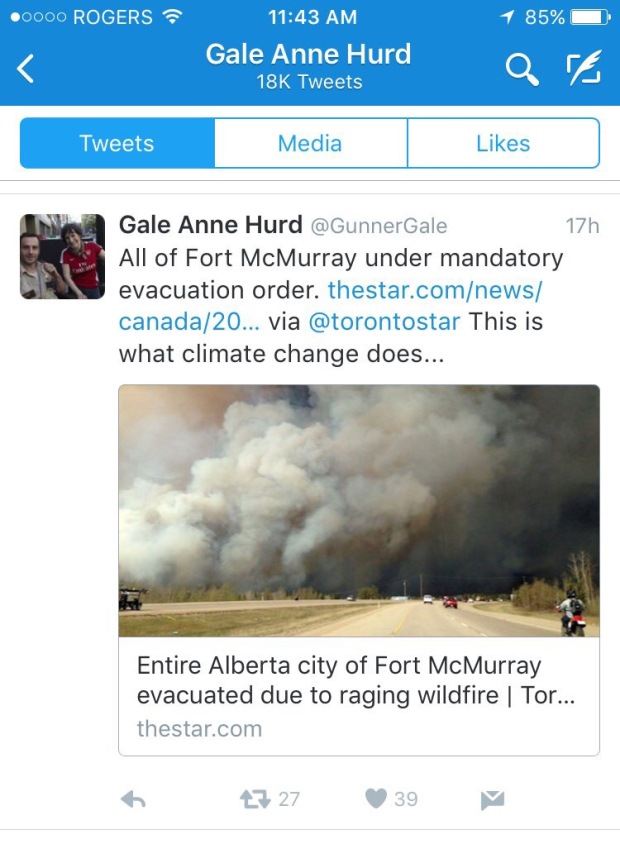 This is despicable to me on so many levels! First, this action shows such little respect and empathy for those in crisis. Just imagine as your entire world is thrown into chaos; to essentially be the victim of heckling as you’re trying to figure our where you and your family will sleep that night. Secondly, to inject an unsupportive agenda in the midst of a crisis is a distraction. In this case a tweet that could have a real impact on real human lives. As an individual in a position of influence, Ms. Hurd must be aware that she has a greater duty of care in how she chooses to respond to events. Finally, as a Canadian I’m grossly taken aback that someone outside our Canadian family would be compelled to tweet their opinions about anything in my homeland. Surely you’ve heard the saying, ‘If you have nothing good to say don’t say anything at all.’ This certainly was the case on Tuesday, May 3rd, 2016.

Shortly after her tweet several people online called her on her lack of sympathy and understanding; myself included. Rather that owning her mistake and doing the civilized thing, apologizing and offering her sympathy, she chose to run for cover and block those who confronted her. For an individual who has built a career on telling stories of human chaos and impending apocalypse she certainly showed her true colours in the epicentre of the real thing.

If you’re inclined to brush this off, please note one individual, Tom Moffat, who has shown a similar lack of discernment surrounding the Fort McMurray Fires was suspended from his job, despite offering an apology.

Sir Canadians are a fiercely loyal bunch. Like any family we may have our own internal squabbles, but we stand up for each other; we protect our own. As such I’m calling on a boycott of AMC until such point as either you or Ms. Hurd offer an apology to the people of Fort McMurray, Alberta. Better yet, be genuine heroes and contribute generously to the Canadian Red Cross on behalf of your entire organization. Show the people of Fort McMurray and, in fact, the world that Hollywood does care about real people; the people you rely on to enjoy the shows you create. Show us your humanity!

Ps – please note this letter will be published on my website and circulated amongst my Twitter followers as I continue to call on a boycott of AMC.

Finally – to my lovely readers you can continue to donate to help Fort McMurray:
1. Text REDCROSS to 30333 to donate $5, or text REDCROSS to 45678 to donate $10.
2. Or donate a larger amount at http://www.redcross.ca/Fort-McMurray-fires.
3. Or donate alongside TheRebel.media crew at http://www.RebuildFortMac.ca or visit their Website (http://tinyurl.com/jcsdxo3) to see other ways you can contribute to the Fort McMurray efforts.

Our brothers and sisters in Fort McMurray need us; do what you can!